Nationwide Building Society redoubled its efforts in 2020 to support the mental health of its employees across the country. Here's how their open and honest communications drove over 35% uptake of the Unmind platform within six months, helping to create a positive culture around mental health.

Last year, Nationwide – the world's largest building society – planned to bolster its mental health programme to support its people, challenge stigma, and effect cultural change. Then, as the country suddenly locked down, the building society accelerated its plans to roll out the Unmind workplace mental health platform to its employees. Nationwide’s wellbeing and comms team worked together to spearhead the initiative and spread the message.

Nationwide aimed to send a positive message around their mental health initiatives and to reach employees across all locations. For this, the team went above and beyond the usual channels and harnessed creative ways to put out a clear, consistent and compelling message.

The internal radio station was used to promote Unmind by sharing testimonial stories about employees using the product. During the week leading up to World Mental Health Day, the team also played a Daily Boost (a short, in-the-moment wellbeing exercise) through live radio aired at around 600 branches and offices, as well as streamed online for those working from home, to a potential 17,000 listeners.

Creating bespoke ads to be played before and after webcasts was a great way to engage with employees before they entered meetings or live events, while concentration is high.

One of the recipes to ensure employee uptake of mental health initiatives is to keep the topic accessible and discussable. Nationwide successfully employs strategies which lead to a continuous increase in uptake and activity.

Each week, a story is shared about how an employee is engaging with the platform – whether it’s how they used lessons from an Unmind Series to help a colleague who was struggling, or how they used a tool to sleep better. Sharing these stories keeps the platform front-of-mind while also promoting the variety of ways it can help.

Unmind dedicates itself to running quarterly user campaigns to engage users with the platform. In July, the Healthy Body Healthy Mind campaign promoted the importance of physical and nutritional health to our mental wellbeing.

Campaign activities included a ‘Eat, Move, Be Healthy’ webinar, the promotion of related platform content, and a prize draw. By completing a health-related series, a Nationwide employee called Carmen Geeleher was delighted to win a £100 Decathlon voucher.

Dr Nick Taylor, CEO & co-founder, and Steve Peralta, chief content officer & Co-founder of Unmind, joined Nationwide leaders for webinars played across Nationwide branches. During these discussions, members of the leadership team share stories about lived experiences of mental health challenges, either personally or through loved ones.

The authenticity with which leaders speak out about mental health really resonates with the workforce. The first webinar resulted in an even greater spike in uptake than launch day itself. 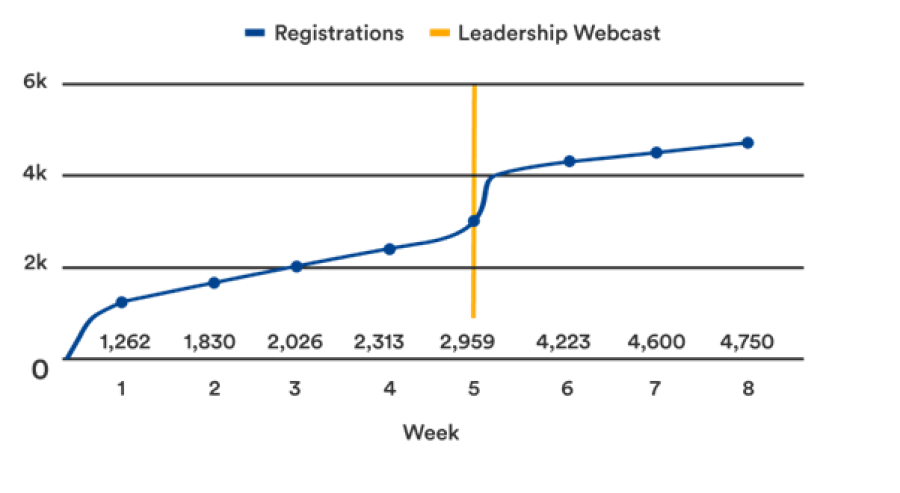 Nationwide created a ‘virtual world’ to facilitate a leadership conference in which wellbeing was a key item in a broad agenda. Delegates could navigate this world and interact with events, which included:

In November 2020, Nationwide launched a winter wellbeing campaign dedicated to making meaningful human connections, and empowering employees to give themselves space and recharge.

As part of a spectrum of initiatives, Nationwide promoted Plus One – Unmind’s feature which enables users to share the platform with a friend or family member – and signposted employees to a range of Unmind Series and Tools to help them connect and unwind.

By leveraging the communications channels available and working closely with the Unmind Client Success team, Nationwide has been able to create significant cultural change around mental health at work.

Since launching in May 2020, Nationwide hit 35.5% uptake of the Unmind platform among its entire workforce within six months.

Faye Whitmarsh, director of people strategy at Nationwide, said: “With the outbreak of Covid-19 at the start of the year, and the subsequent lockdowns, our mental health is more important than ever. At Nationwide, we want to make sure that the right support is available for our people at the right time, as we give them the tools to take care of their own wellbeing, and that of others too. We want to see our people thrive, not just survive when it comes to our mental health.

“Our very foundations are built on the notions of mutual kindness, respect and understanding, and this unwavering commitment to looking after ourselves, and each other, meant we could accelerate the roll-out of Unmind to our people at the very start of lockdown.

“Unmind is a key part of a broader strategy that focuses on the wellbeing of everyone at Nationwide, both colleagues and members. It represents a commitment to continuously evolve and rethink how we work, how we support each other and how we build a workplace that is diverse and inclusive to its core.”

Carmen Geeleher, personal banking manager, added: “The offer of Unmind from Nationwide came at just the right time. With such a broad range of content from mindfulness to mental health, and from managing mood to being kind there is something there to help, no matter how you might be feeling. As a busy wife, mother and full time employee, it helped me to take some time for myself, to reflect a little more, manage my own wellbeing and focus on mindfulness.

“When faced with such unusual times, it’s been a great tool that I can delve into at any time when I need extra support, or a different perspective, when things might not be going as well as they usually do. Unmind has helped me to help myself, which means I can help others to do the same.”

This is a sponsored article provided by Unmind.

In partnership with Unmind

Our vision is to create a world where mental health is universally understood, nurtured&celebrated.

REBA inside track
Members only

This research identifies the factors influencing change, how businesses will adapt benefits strategies, and what actions they will be taking in the next 12-24 months to better align their benefits with wider business needs.