Pay squeezes need to be looked at through a wider lens

I don’t want to be flippant, or disrespectful to employees who are feeling underpaid, when wages just seem to be shrinking alongside higher food prices, council tax rises and fuel costs. But the big numbers around general pay rises which we see the BBC, TUC and CIPD commenting on hide a more complex and nuanced picture than it might appear. 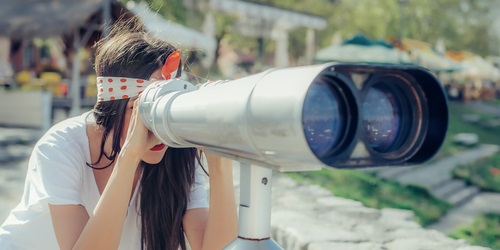 So where do the numbers come from? In October every year, the ONS reports on the average pay rises (based on NICs - so a pretty big dataset) through the previous year.

On top of that, many organisations also report their pay settlement figures, so we get additional information about agreed settlements from employers, and trade unions.

But it’s only looking through one lens of a very diverse picture of wages and pay in the UK. When you are talking to your remuneration committee or board, you might want to consider the following - here’s the science…

Although the public sector is capped at 1% rise per person, this masks the incremental system which still exists in teaching, NHS, police and other public sector employers. For those who’ve never been exposed to incremental pay ranges, it is a pretty substantial amount. Here are the teaching increments for an ordinary classroom teacher: 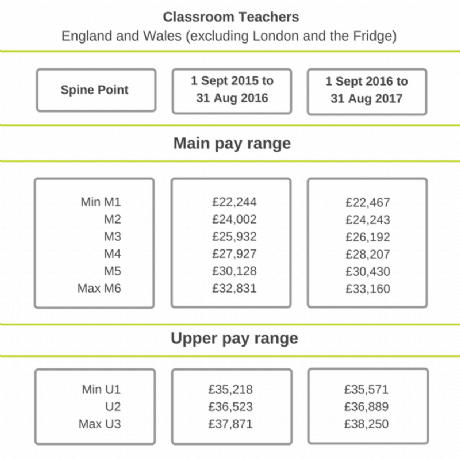 So a young teacher two or three years into his career can expect a 8% pay rise, on top of the 1% scale movement. Of course, in the end you reach the top of the band, but then there are other allowances and a leadership scale on top, for those more experienced - so it’s definitely not a total 1% whitewash.

In the private sector, we often probe clients about exactly what they are spending outside the annual pay review. Spending through the year on promotions, market-rate reviews, the ‘she’s going to leave if we don’t give her a bit more’ conversations.

Knowing this number - the grey economy, as we term it - is essential for good pay governance (not just for pay management reasons but also looking at what’s driving the gender pay split). Looking across our macro client dataset, on average, clients are spending a further 50-100% on top of the annual pay review pot. Yes, you read that right - another 1 or 2% of the pay bill each year.

Actually, when we look in more detail at the ONS survey, we can see that it actually agrees with this finding. 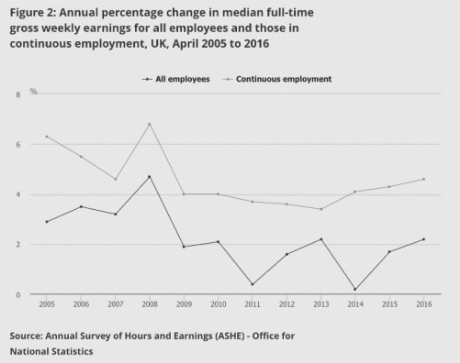 Look past the front page of the report, and you find Figure 2. The top line is the average increase in pay for those in ‘continuous employment’ – what the ONS calls people who’ve worked for the same employers for a year or more. You can see that the average pay has actually increased by 4.6%. And it’s not a flash in the pan - the previous year was 4.3%. In fact, the top line has remained pretty consistent over the past ten years or so.

Finally, the war for talent - we know it’s over and talent won. A whole set of invisible data tells us that there is a gap between pay for someone who leaves the company, and the new joiner.

And, against the historical picture, where an experienced, well-paid employee left to be replaced by a less well-paid, less experienced individual whose pay would increase over time - well that’s not the case either. As HR professionals we know anecdotally, but a survey from the Recruitment & Employment Confederation (REC) confirms it. Nearly half (42%) of employers increase the salary on offer when forced to re-advertise a job. As many as 80% will re-advertise a role and, in a quarter of cases, have resorted to lowering the job requirements when doing so.

And that increase isn’t captured anywhere - not by the ONS, not by the unions, and not by the employer. So we never hear about it.

I know there are those who are stuck on a low pay rise, and their wages have risen at a lower rate than inflation, meaning their cash goes less and less far each month, but it is lazy and myopic to think it’s the whole picture - look through a wider lens.

Deborah Rees is head of consulting at Innecto Reward Consulting.

This article was provided by Innecto Reward Consulting.

With the nature of the workplace changing, Matt Wintel, head of talent acquisition and development at Admiral Group, outlines what that means as the business moves forward

Can paternalism have a positive role in the workplace?

Businesses need to take an ‘organisational’ rather than ‘paternal’ approach

7 things to consider when creating an employee engagement strategy

How to give employee awards that actually mean something

Personalised symbolic awards can be a great motivator in the workplace, while generic awards can have the opposite effect