By February 2020 and December 2020 the FTSE 100 and FTSE 250 indexes had reached the gender diversity target for boards of 33% female membership, which was set by the government-commissioned Hampton-Alexander Review four years earlier. 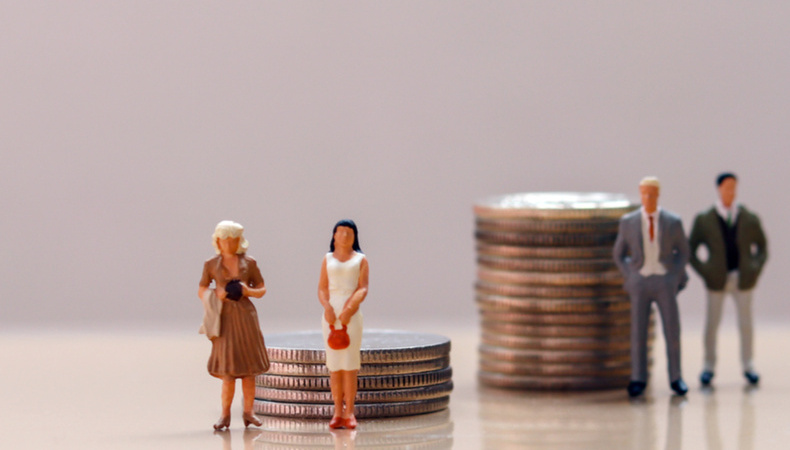 This was a huge milestone for the FTSE 350 in taking gender diversity seriously in just a short period. Yet there is still lack of female representation in executive committee roles, as the FTSE 350 has yet to reach this quota.

Across the C-suite positions, it is fair to say that female representation has been progressing throughout the years. Furthermore, females tend to dominate the CFO position more than others. 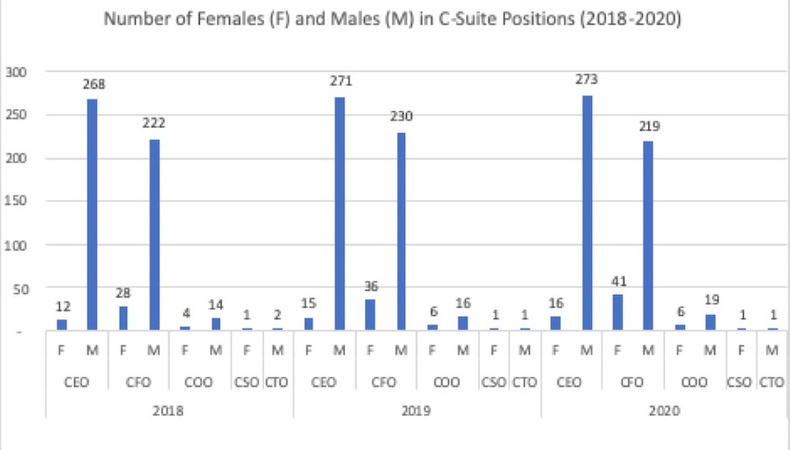 Data suggests that all CEO positions across all sectors are still male dominated. 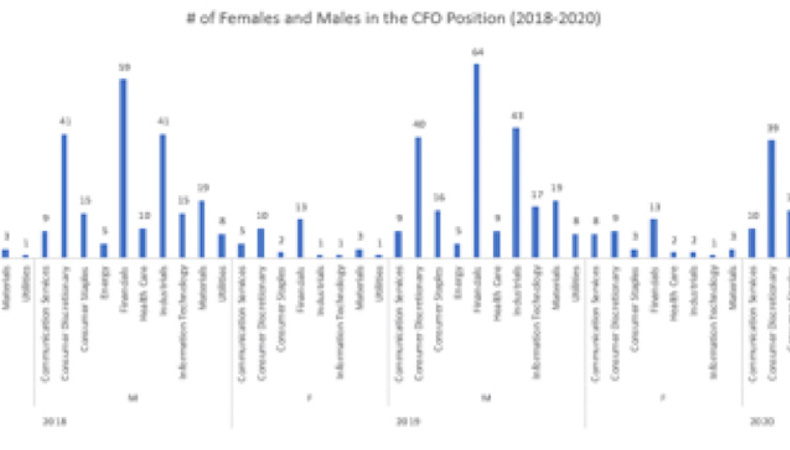 Similarly, all industries are more likely to have male CFOs than females throughout 2018-2020. However, there is larger growth in female CFO presence across different industries than that of female CEOs. 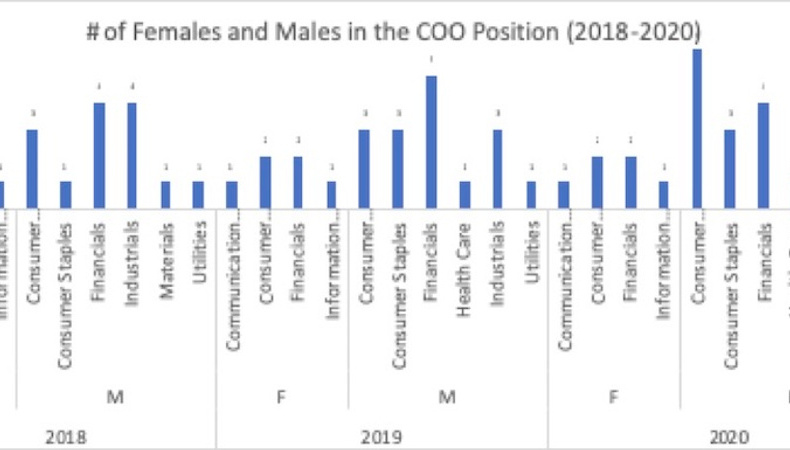 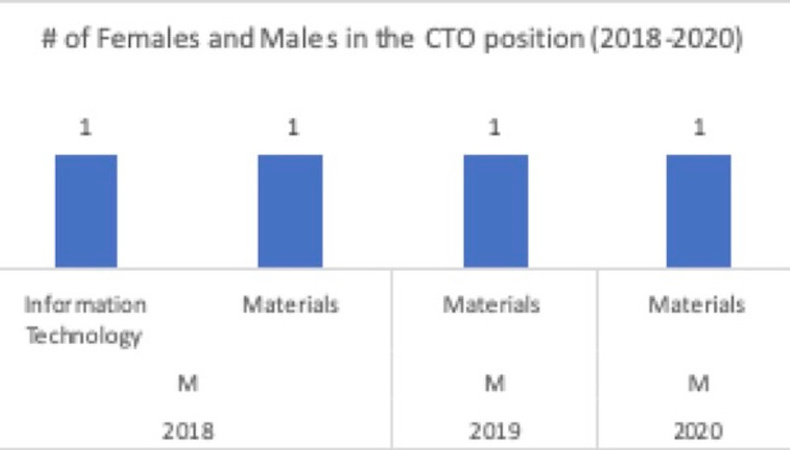 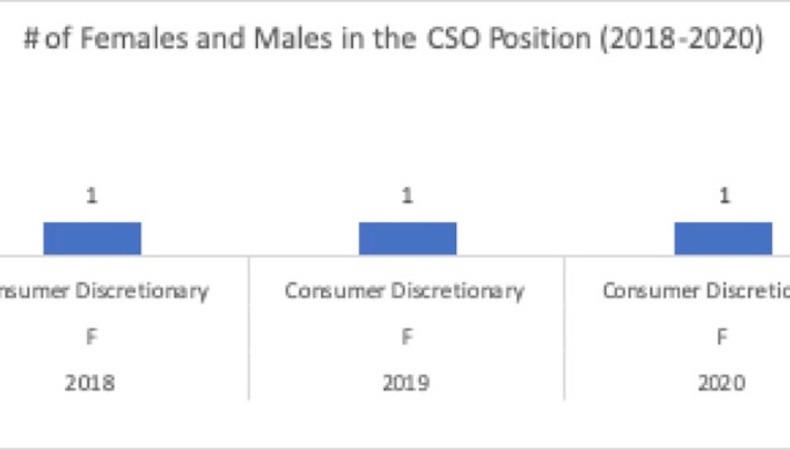 On the other hand, there is only one female representation in the CSO role throughout the years.

These statistics show that the FTSE 350 are improving female representation, but at a slow rate. Furthermore, studies show that the number of women in senior roles might not be at par with that of men until 2036.

The gender pay gap has sadly been a constant and incessant problem in the workplace. The key determinants for women being paid less than men include women working fewer hours due to family and household responsibilities and entering less lucrative industries, or “nontraditional” female sectors. However, economists believe that gender discrimination and stereotyping contributes to the gender pay gap.

The social pressure for change in gender pay parity has been immense, so much so that companies are committed to publicly disclosing hourly compensation and bonuses across male and female employees. Some regulations in different countries go as far to mandate gender pay gap disclosures as an initiative to close the gap. Many countries, including the UK, require companies with more than 250 employees to provide these disclosures or face fines and court orders.

Out of 9,628 UK companies that filed their gender pay gap reports in 2019, 7,572 companies reported that male employees are paid more than female workers and only 770 companies disclosed gender pay parity. The COVID-19 pandemic has exacerbated the gender pay gap in the UK, wherein women are more likely to have lost their job than men.

Within the five C-suite positions except for the CSO role, the total TRP and TGP of men throughout the years were considerably higher than that of their female counterparts. The significantly higher male representation throughout all the years obviously plays a part into the gender pay gap.

Although both the average TGP and TRP of men and women in C-suite positions are not far off, there are still some noticeable discrepancies in gender pay gap.

Fortunately, female CEOs are on par with, if not have higher, TGP and TRP. On the other hand, female CFOs and COOs are still struggling to close the gender pay gap throughout the years.

According to Diligent’s analysis, female CEOs are paid on average higher than males in the communication services and healthcare sectors. On the other hand, male CEOs in the industrials sector are paid 46 times higher in TGP and 40 times higher in TRP than their female counterparts.

Though British companies have been transparent in disclosing their gender pay gap, they have not been providing actionable solutions to close it as the government merely recommends them to. Not only should companies be clear on their pay gap reporting, but they must also be transparent in how they measure their compensation and discretionary bonuses. Research shows that lack of information and secrecy clauses in pay results in negative behaviours in the workplace and can lead to speculation about gender discrimination.

Companies must also start enforcing gender quota in senior roles as well. These recommendations must be taken into account as an attempt to close the gender pay gap, and not just a tokenistic tactic to fulfill the minimum quota. Proxy advisory firm Glass Lewis recommends against the re-election of nomination committee chairs that did not reach 33% female representation in leadership teams.

Many factors play into the gender pay gap, one of them being a lack of flexibility in work arrangements. Companies must continue to provide flexible work arrangements to accommodate most women who bear the brunt of household responsibilities such as childcare and chores. In addition, breaking the cultural norm of mothers bearing all the household responsibilities is pivotal to create career-focused women and narrower gender pay imbalance.

Some companies are pioneers in ensuring better pay alignment between men and women, and the responsibility of ensuring gender diversity must not only fall on bodies of authority like the government but must also go to companies if they regard gender discrimination as an important issue.

According to the World Economic Forum, it will take more than 250 years until the whole world achieves gender pay balance. While there is progress, it is slow, and there is huge room for improvement from companies’ attitude in solving it. Rather than companies treating female representation targets as a one-off solution, companies must push for long-term and sustainable action plans to keep women in their workforce and to compensate them fairly.